The March of Excel Progress

The vast majority of DPL users are also heavy Excel users, and they sometimes ask us about the pros and cons of the various Excel versions. Oftentimes they have no choice in the matter – the corporate IT department is rolling out a new version of Office, and they just need to know what they’re in for. DPL has been closely integrated with Excel from the earliest days, so we definitely have an opinion. This post summarizes the highs and lows of recent Excel history, from the perspective of power users doing analytical work.

First the good news, DPL works with all of these Excel versions. If you’re using DPL 8 and Excel 2016, you’ll need 8.00.12 or later. You do need a real (i.e., not cloud) version of Excel running on your desktop. While casual noodlers can spreadsheet in a browser, analysts still need to work locally, and most pro level Office licenses reflect that.

2003 is the last of the Excel versions with traditional menus. It was a good one, particularly for people accustomed to navigating menus with the keyboard. (Tip: many of the old menu keyboard shortcuts are “grandfathered” in later Excel versions, e.g., ALT-I-R for inserting a row.) We had no complaints about this one, but all things must pass.

2007 was the biggest change to Excel in more than a decade, and it brought the new “ribbon” interface. We were initially skeptical about the ribbon, but the more we used it the more we liked it, particularly the fact that it helped to reduce dialog box sprawl. We redesigned DPL’s user interface to use the ribbon with DPL 8, and users have been happy with the change.

2010 is the high point of Excel thus far. It wasn’t all that different from 2007, but there were some refinements, and it was largely bug free. “Fix it first” is a good principle, whether you’re talking about roads and bridges or productivity software people use on a daily basis. If you’re running Excel 2010, don’t let go!

Excel “lucky ‘13” is perhaps the biggest dud in the history of Microsoft Office. Avoid it if you can. Most notably, it discards the highly successful Multiple Document Interface (MDI) in favor of the less hierarchical, stupider Single Document Interface (SDI). Think of it as the paleo diet for GUI’s. SDI is great for computer illiterate media consumers, but for power users it’s a huge step backward. Moreover, the change brought several serious bugs that affect solution developers, breaking code that had worked reliably through several previous generations. Did I mention it’s slow? Excel 2013 takes a place of honor next to Windows Vista and Microsoft Bob.

For grins, we have summarized this brief history in the form a March of Progress illustration. (Thanks to Benitos and Garde for the base art.) 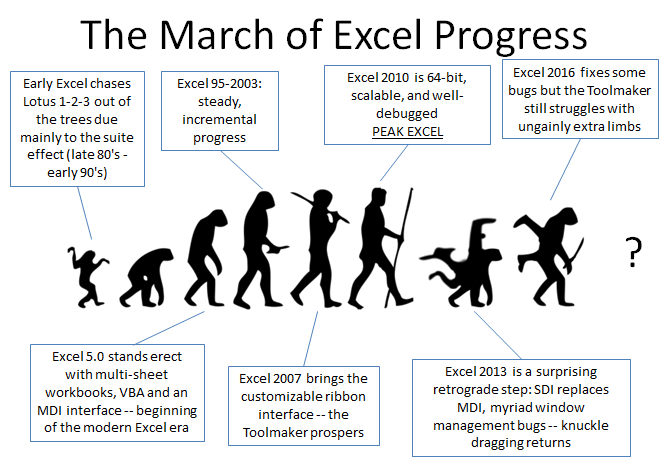