A Different Twist on the March Madness Bracket

Each year I check to see if my Alma Mater has made it to the NCAA Men’s Basketball tournament. This usually dictates how I fill out my bracket. Yes, I realize I’m making decisions with my heart and not my head. Not particularly decision analytic of me.

Alas, this year my Alma Mater is not in so I can be more analytical about filling out my bracket. In that vein, I have put together a March Madness decision analysis model with a slightly different twist: how many upsets will occur in this year’s March Madness tournament? The answer to that question just so happens to be helpful in determining when to purchase DPL in our March Madness special!

The model has a chance node for each game in the Round of 64, Round of 32, Sweet 16 and Elite 8. The probability of an upset varies by the round of the tournament. I populated the probabilities in the model using historic data on upsets in the tournament since 1985. An upset is defined as an 11 or lower seeded team beating a higher seeded (i.e., favored) team. The model uses a converted version of a bracket spreadsheet I put together as well as indirect conditioning to determine whether team 1 or team 2 in each games is the higher seeded team.

We’re updating our March Madness special discount after the Rounds of 64 and 32 and then after the Sweet 16 and Elite 8. Since we aren’t updating the discount after that, I did not include chance nodes for the two Final Four games or the championship game. As it is, the model has 3.46 x 10^18^ paths! With this many paths, I used discrete tree simulation to analyze the model. So when should you buy? Based on historic data, see the Policy Tree below. 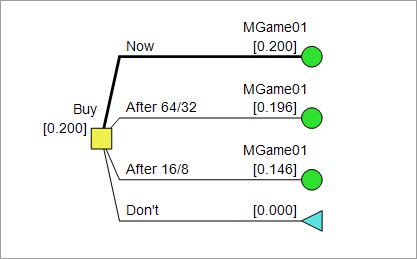 Click here for the model. Feel free to put your own probabilities in to determine when you believe it’s best to take advantage of our March Madness special!