Big Data and Decision Analysis: From Data to Information to Decision Quality

Most decision analysts greet “Big Data” with considerable scepticism. Eyes roll, arms are crossed, someone mumbles something about driving while looking in the rear view mirror. It’s safe to say Big Data hasn’t been welcomed with open arms by the DA community.

When some new/rebranded management science thing comes along, we can react in one of several ways:

0. This thing is worthless rubbish.
1. This thing isn’t new, we’ve been doing this all along.
2. There are certain niches in which this thing might be useful (just not the ones I usually work in).
3. This new thing has/will change the way I work. 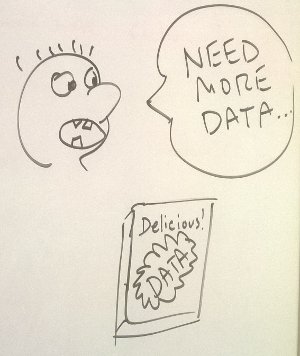 Sometimes, we start at 0 and stay there. Some new things really are crap (AHP anyone?). It’s rare to jump right to 3; that only happens with new things that are non-threatening, ideas or tools we can integrate into our practice without changing anything fundamental (e.g., going way back, old school DA geeks were happy to lose their APL skills and use spreadsheets). Most decision analysts seem to be responding to Big Data with 1 or 2 at the moment.

Big Data is particularly annoying for decision analysts because we’ve often been in the role of dissing Little Data. Data is about the past, value is about the future. We’ve seen people so intoxicated by data (even the Little kind) that they’re unable to lift their heads and look forward. You can’t extrapolate your way to prosperity.

But it’s partly our fault. Decision analysts are often data lazy. To borrow from Amazon.com, Direct Assessment and You’re Done! Say we need to know the percentage of blue haired customers who will migrate to the next generation of hairbrushes. There’s some uncertainty? No problem, put a range on it! But, what if it ends up at the top of the tornado, and someone offers us a wodge of clickstream data that might tell us what the blue haired people are looking for? We ask for a subject matter expert, and the client says “Isn’t that you?”. That’s outside the average DA Joe’s comfort zone.

From a distance, one would expect Big Data to drive down the cost of information. Data isn’t information, but it’s the raw material from which one refines information. Fortunately, for all our data aversion, decision analysis people are on familiar turf when talking about information and its value. Before, we might have said that a primary market research study into the bluehairs would be too time consuming and expensive. Now, it’s a no-brainer that we should spend a few thousand dollars worth of staff time on data analysis to reduce uncertainty.

So Big Data meshes well with the value of information we all know and love, but if we keep it in that box, we’ll miss out on much of its value. Beyond mere variance reduction, Big Data also has huge potential in the generation of creative alternatives. Who knew bluehairs were going to dreadlocks in droves? We did, because we had the data and asked the question. Can we capitalize on that?

Big Data is changing the practice of management consulting, and we’ll all have to respond to it in ways that work for us as individual people/firms. I would offer a few suggestions for cohabitating with Big Data in a peaceful and successful way: